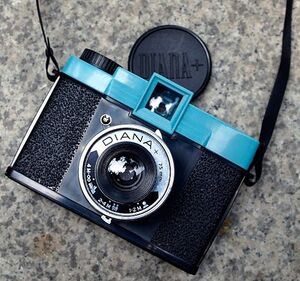 Manufactured since 2007, the Diana+ is a replica camera produced by Lomography in an attempt rekindle people's love for the original Diana of the 1960s - a "toy camera" produced by the Great Wall Plastic Co.

The radiant color-dripping lens, soft-focus surprises, all-plastic body and simple shutter of the original Diana were expertly duplicated to provide the authentic look and feel for the Diana+. During development, the decision was made to add new features, namely pinhole photography facilities and the option for endless panorama shots. Keeping the same 75mm plastic lens design, this has two formats, the original 16 frame 4.2x4.2cm, and a 12-frames-per-film 5.2x5.2cm, and also adds a tripod socket and shutter lock. Many accessories have been produced for the new Diana, including an instant-film back, a pinhole lens, a hot shoe and lens converters for Close-Ups, 20mm Fisheye, 38mm Super-Wide, 55mm Wide-Angle and 110mm Telephoto.

There are several special editions, in various colours, some to commemorate events or tie-ins with particular retailers; these include:

Lomography have also created the Diana F+ which offers a similar specification to the Diana+, but features a replication of the original Diana Flash. The flash face is cast in reflective silver, and it syncs with the Diana F+ via a traditional metal plug connection.

Retrieved from "https://plasticcameras.fandom.com/wiki/Diana_Plus?oldid=3995"
Community content is available under CC-BY-SA unless otherwise noted.