Lomography, a registered trademark of Lomographische AG (Austria), is a movement that, via the Lomography Society International, promotes the use of Lomo cameras — primarily and most famously the LC-A but also cameras as unlike this as the fisheye lomography camera — and a "shoot from the hip" attitude. (Many outsiders regard it as merely a sales gimmick to drive sales of these cameras at inflated prices.) Viewed as either a modern impressionistic art movement for photography to create images of everyday life or a simple (and effective) marketing ploy, Lomography has attracted a large international following around "The 10 rules" 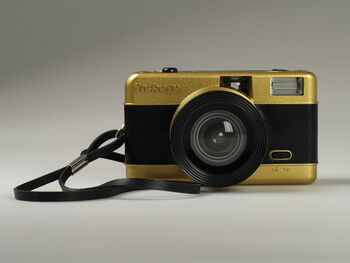 The photographic results of "Lomography"Edit

Everyday people, colorful objects, and unusual or surreal situations and people are just a few examples of common lomographic subjects.

Many lomography cameras feature degrading around the edges of the images, also called vignetting. The cameras which provide this effect are usually Holga or the Diana. Vignetting is most pronounced with the use of medium format film on a 12 shot setting without the use of a frame mask.

Probably the most profound aspect of lomography is the unexpected and widely varying saturation, random lens flashes, light leaks, and double exposures. Although achieving these effects is undesirable in traditional photography, they are the entire goal of lomography.

As this movement was created and is run by the "Lomographic Society", the sole legal importer of LOMO products to the United States, many have suggested that the Lomographic movement was started as a viral marketing campaign. The Lomographic Society was able to increase the demand for its products by creating a group of which its customers would instantly become members. This increased demand led to increased prices - the LOMO LC-A, for example, would cost about $30 US in the former Soviet Union. If bought through the Lomographic Society, the same camera would cost $200 US. Judged in terms of profit and generated hype, this marketing campaign has been very effective.

In addition to the cameras made by the LOMO factory, Lomographic also sells other cameras:

Retrieved from "https://plasticcameras.fandom.com/wiki/Lomography?oldid=4020"
Community content is available under CC-BY-SA unless otherwise noted.