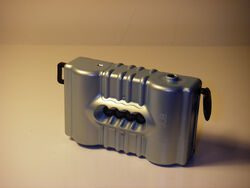 Known as "The Queen of all multi-lensed cameras" Lomography's SuperSampler is a four-lensed camera with a ripcord and a button. The camera has two speeds: 4 photos in 2 seconds or 4 photos in 0.2 seconds. The subject or the camera can move to create the variation in the frames. The camera operates without batteries and takes 35 mm film, including negative, slides, color, or black and white. The photos can be developed anywhere film is developed as long as the developer is aware of the type of camera used.

Here is an example of a photo taken with the SuperSampler camera:

Retrieved from "https://plasticcameras.fandom.com/wiki/SuperSampler?oldid=3997"
Community content is available under CC-BY-SA unless otherwise noted.