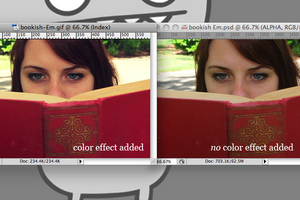 When you think of a photograph you picture a moment suspended in time. But what if you could suspend multiple moments in time? Now you can! After seeing some moving pictures, people from Photojojo wanted to replicate the effect and posted a tutorial on their site.

First it is important to grasp how the picture can move. Graphics Interchange Formats (GIFs) allow movement of photographs to be shown. It is basically a format that supports animation. After the basic concept is grasped, the basic tools need to be acquired.

The the tutorial shows step-by-step how to create a cinemagraph of your own. From visioning your scene to framing the scene, the instructions are thorough.

Would you like to create a cinemagraph? What would your scene be?

Retrieved from "https://plasticcameras.fandom.com/wiki/User_blog:Meganhassler/Photos_No_longer_Limited_to_Still_Life?oldid=4143"
Community content is available under CC-BY-SA unless otherwise noted.